Well, we’re already 3 months into 2015.  By now, most resolutions have long been forgotten.  As for me, I stopped making resolutions a long time ago.  To me, resolutions seem rather pointless & cliché; however, that doesn’t mean that I don’t often take the time as a new year emerges to reflect on the past, on life and to make plans for the future.  I recalled an article that I read several months ago about the passing of Fritz Blank. Who was he you ask, he was the owner/chef of the long since shuttered French restaurant Deux Cheminées. At the time I was in culinary school, there were only a handful of restaurants in Philadelphia that I esteemed to work as an apprentice.  Deux Cheminées was one of them and I took on my second apprenticeship there in 1996 in what would end up being quite the experience and a very long summer.  The article led me to reflect on a career that I probably wouldn’t have dreamed of as a young girl. I had no designs to open a restaurant, but I knew I loved everything about food and that somehow it would all become clear.
It’s not a career that has been a constant as I spent over 10 years working in finance, or shall I say “dutifully working in a field in which I had a degree.” It was a career in which I always worked very hard but in the end it proved to be just a job & I think I feared that one day I would be found expired at the age of 60 face down on the keyboard. The only career I have ever truly enjoyed is in the culinary arts.   It’s truly a passion, career that I enjoy and there is something about giving your all and having a sense of happiness and fulfillment; however, my apprenticeship at Deux Cheminées made me question whether I had what it takes to make it in my newly chosen career.
Chef Fritz Blank was an interesting person, incredibly knowledgeable and willing to share that knowledge.  You just had to make sure you were attentive and listening even if at the moment you were not in the mood to hear an hour long lecture on corn.  He never struck me as the warm and fuzzy type but I half expected that as an apprentice, especially a female one.  I remember the mornings I headed off to the restaurant, I would pray to God to just get me through the day and keep me out of the cross-hairs of Chef.  Keeping out of his line of sight often meant me volunteering to do anything pastry-related. The kitchen was at basement level and there was no air conditioning and there were days it was hotter than hell.  I remember beads of sweat rolling off onto the asparagus I was grilling (it happens) & having to roll gougere in the walk-in refrigerator because the heat of the kitchen was melting them.  In the middle of summer I ended up with bronchitis because I was spending so much time in there.   Chef was a very particular man.  Before cooking, he was a microbiologist, which explained why we all did things the way he wanted them done.  As a group of chefs & waitstaff, we were not permitted to go into the walk-in refrigerators alone on hot days unless we went in as a group, collected all of our things, and then came out as a group.  It made for a lot of laughs but damn if that walk in never dropped below temp.  That was the whole point.  I used to walk around with a little blue spiral memo pad in my chef’s coat pocket.  Always making copious notes and writing down recipes.  I’m so happy that to this day, I still have that little notebook, the writing faded, food stains on torn pages.  One of the last things I can remember making was an Apple Bavarian Torte. It was during my final days of my apprenticeship. The torte was a recipe Chef wanted to try out. I felt like my whole learning at Deux Cheminées culminated in me making this dessert perfect.  Well, I don’t think Chef ever would have said it was perfect but he did like it and I believe he actually smiled.  It was a good day & I had survived.
I’m grateful to have learned from someone who had the desire to teach and share all what he knew.  It really has made a difference because so much of what I learned has helped me along the way. I want to share with you the recipe for the Apple Bavarian Torte.  I’ve been making it for almost 20 years and it is my “go to” dessert.  It’s a great recipe for fall & winter and in the summer I substitute peaches for the apples.  It’s not fancy by any means, but it is very versatile and can complement any meal.
Here is a link if you would like to read a short article on the restaurant & Chef Fritz Blank: http://www.bizjournals.com/philadelphia/stories/2007/05/07/story5.html?page=all 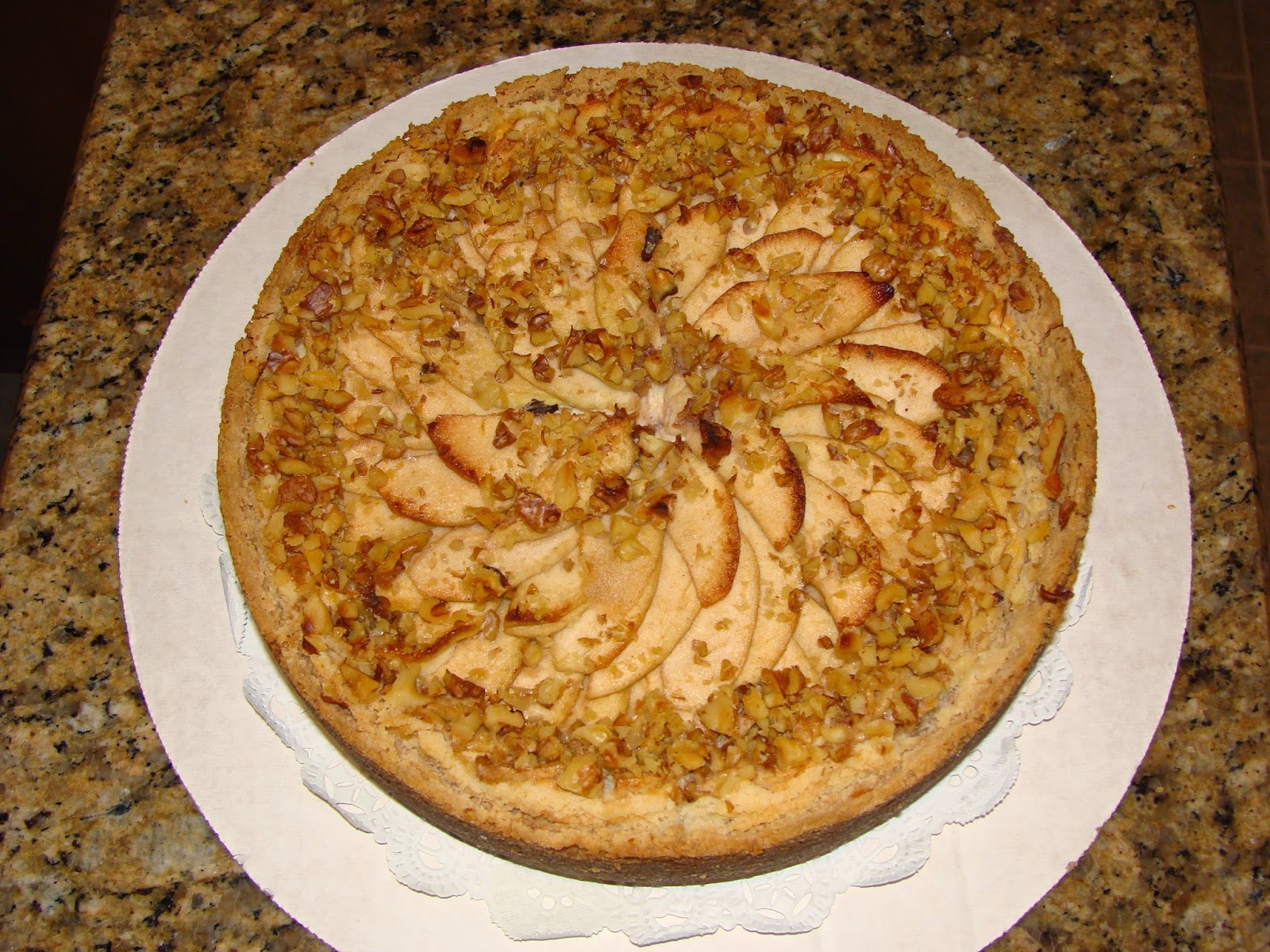 Equipment:  9” non-stick springform pan
Ingredients:
1 ½ c.   unbleached flour
¾ c.      unsalted butter, chilled
½ c.      granulated sugar
¼ tsp    pure vanilla extract
3          Granny Smith Apples, peeled & sliced
½ tsp    cinnamon
¼ c.      granulated sugar
1 tsp     pure vanilla extract
16 oz.   cream cheese, softened @ room temperature
½ c.      granulated sugar
2           whole eggs
1 tsp     pure vanilla extract
¼ c.      chopped walnuts
Instructions:
Place the 1st four ingredients in a food processor.  Pulse until the ingredients are combined & forming a dough.  Take the dough & form it into a ball, wrap in plastic and refrigerate for 15 minutes.  Roll out the dough on a floured board.  Place in the springform pan pushing the sides up the pan.  If there are tears in the dough, gently press on the dough to cover & repair.  Partially bake in a 450 degree oven for 15 minutes. Remove from oven and allow crust to cool in pan. **The dough has a tendency to slide down the sides so you may have to intermittently push the dough back up the sides while it is partially baking.
Place sliced apples in a bowl and toss with the cinnamon, sugar & vanilla.  Set aside.
Next cream the cream cheese in a mixer.  Add the sugar & blend until combined.  Add eggs one at a time until combined then add the vanilla extract.  Pour the batter into the cooled crust.  Then layer the apples atop the batter in a circular pattern, slightly overlapping.  Sprinkle the walnuts on top.  Bake the torte in a 350 degree oven for 45 minutes.  Remove and cool to room temperature.  Keep refrigerated until ready to serve.
Posted by KitchenOnCarlisle at 4:56 PM