Well, Valentine’s Day came & went almost a month ago and while I’m a bit delayed in writing a Valentine themed post; nonetheless, I thought I would share: How I Celebrated Valentine’s Day or as it’s known to those of us without a Valentine: Single’s Awareness Day.  Being single for many years now, I have almost come to loathe the day that celebrates “love".  But this year, I decided to embrace it.  I even bought a heart shaped wreath & hung it on my front door; which, if you live in South Philly, is somewhat expected in the ritual of holiday window decorating.    At some point, I even flirted with the idea of actually going out to dinner on Valentine’s -- ALONE.  I decided I’m brave but not that brave.  Instead I enjoyed an evening at home with me, myself & I.  Armed with Adele’s “21” cd, Veuve Clicquot champagne (my fave) & a large fork, I cheerfully celebrated (with forkfuls of decadent chocolate cake) what I now affectionately refer to as “Singles Appreciation Day”.  ❤
Now, I don’t profess to be a great baker & I have to tell you, I don’t always make everything from scratch, but the cake I made for my Valentine’s Day, truly was made with love along with a lot of patience.   The cake is a multi-tier cake w. layers of chocolate mousse & whipped cream.  The icing is a chocolate German buttercream.  The actual cake mix is store bought but the mousse filling & icing are all homemade.  When I was a child, my mother used to always make homemade  birthday tortes.  Her German buttercream icing still lingers in my mind & tastebuds.  To me, there is none better.  It’s a combination of pastry cream & butter and is incredibly light.  The chocolate mousse is a classic preparation using bittersweet chocolate and while it is rich it is not overly sweet & is perfect as a filling for a cake or served on its own.  There are several steps to this recipe and it’s somewhat challenging but the end result is worth it!  It’s a definite crowd pleaser and packs a lot of “Wow”! 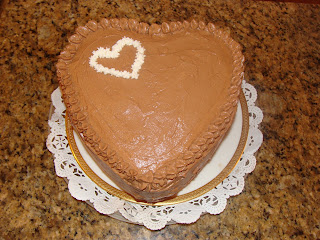 HOW TO MAKE THIS CAKE:
Equipment:  2 small heart-shaped cake pans or 2 regular 8-inch cake pans
Cake Mix:
1 store bought package of Devil’s Food cake mix prepared according to the instructions
Chocolate Mousse:
Ingredients:
7.5oz    chopped bittersweet chocolate
4.5oz    unsalted butter
3           egg yolks
6           egg whites
1.25oz  granulated sugar
4oz       heavy cream
Instructions:
Melt the chocolate & butter in a double-boiler over low heat.  Stir until smooth.  Take off stove & allow to cool slightly then whisk in egg yolks one at a time. Set aside.  In a mixer, beat the egg whites until soft peaks form then slowly add the sugar and beat until egg whites form stiff peaks.  Fold the egg whites by thirds into the chocolate mixture.  Be sure egg whites are fully incorporated into mixture.  In a separate bowl, whip the heavy cream to soft peaks.  By now chocolate mixture should be cool.  Fold the whipped cream into the mixture, again making sure no streaks of white remain. Chill mousse if not using immediately.
Chocolate Pastry Cream:
Ingredients:
2 cups   milk
¾ cups  sugar
6           egg yolks
2Tb      flour
3Tb      cornstarch
Pinch of salt
4oz      chopped semi-sweet chocolate
Instructions:
Scald the milk with half of the sugar.  In a stainless steel bowl, ribbon the egg yolks with the remaining sugar.  Sift together the flour, cornstarch & salt and then whisk into the egg yolk mixture. Slowly pour a small portion of the milk mixture into the egg yolk mixture while whisking constantly so as not to curdle the egg yolks.  Then in a slow steady stream add the remaining milk mixture while continuing to whisk.  Now pour the pastry cream into a heavy saucepan and on medium heat slowly bring the pastry cream just to the boiling point all the while stirring.  As soon as the cream comes to a boil, reduce the heat and simmer for a minute or two.  It’s very important to stir the cream & not allow it to get too hot; otherwise, it will curdle.  If it turns out you have a few lumps, you can always strain it through a fine metal sieve. Remove the pastry cream from the stove and add the chocolate.  Stir until completely melted.  You can cool the pastry cream in a separate bowl placed in a shallow ice bath.  Place plastic wrap directly onto the pastry cream to avoid a skin forming.  By now you have probably realized that you just made homemade pudding. J
German Buttercream Icing:
Ingredients:
8oz      unsalted butter @ room temperature
8oz      chocolate pastry cream @ room temperature (recipe above)
Instructions:
Cream the butter in a mixer then add the pastry cream and continue to blend on a medium speed until both the butter & pastry cream are incorporated and the mixture is light and fluffy.  Slightly chill the icing until ready to use.
Stabilized Whipped Cream:
Ingredients:
1 cup   heavy whipping cream(chilled)
1pkg    whipped cream stabilizer such as Dr. Oetker© brand
Instructions:
Add the stabilizer to the whipping cream and beat until medium peaks form.
To assemble cake:
Slice each cake in half horizontally so as to have 4 pieces.  Lay down the first piece then top with the chocolate mousse.  Add second piece and top with the stabilized whipped cream.  Add the third piece and top with the chocolate mousse.  Add the final piece and frost the cake with the buttercream icing.﻿
Posted by KitchenOnCarlisle at 4:13 PM No comments: